"Real Watches For Real People" Is The Oris Watch Slogan

An Oris watch is an affordable luxury watch for everyday and average laypersons. The company’s mission was to create a high-quality timepiece that was also affordable. Some not-so-average people, like Vito Spatafore, have been seen wearing a stainless steel Oris XXL Worldtimer. The watch runs on an ETA 2836-2 movement and was first produced in 1997. 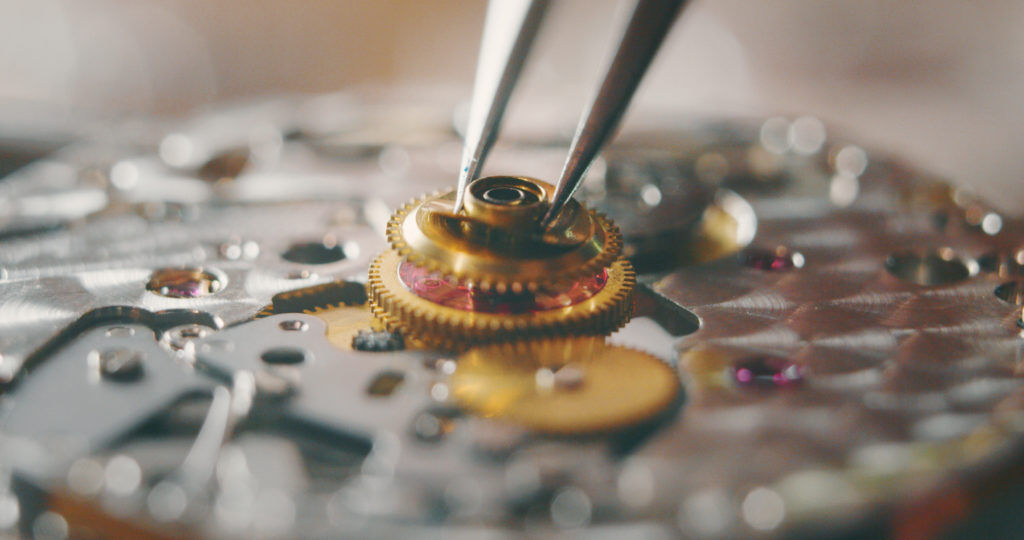 In 1904, Paul Cattin and Georges Christian contracted with the local mayor in the Swiss town Hölstein and named the company Oris after a nearby brook.

Only a few years later, the men open an assembly plant and second plant in Holderbank. Oris was a successful watch factory by 1911, and was the largest employer in Hölstein with 300 employees. To sweeten the deal, they built houses and apartments for their workers. Oris was one of the first companies to create equal opportunities for both male and female watchmakers.

By 1929, the company expanded the number of factories it owned by five.

The factory in Hevetswil was the only electroplating factory Oris owned. The company began fitting bracelet buckles to its pocket watches, which transformed the piece into a wristwatch.

Oscar Herzog, as general manager, had the ambition to improve the quality of his company’s products, but ran into some trouble in 1934 when the Swiss government introduced the “Watch Statute.”

This was a bit of legislation that prevented watch companies from introducing new technologies without permission. This law was created to protect and regulate the watch industry.

The Swiss “Watch Statute” prevents Oris from introducing new technology for over thirty years. In 1966, the statute was reversed, laying the foundation for Oris to unveil the Oris Calibre 652 just two years later. The watch uses a superior level escapement. J

In 1938, Oris introduces its first watch for pilots. The watch was identified by its big crown and calendar function. The watch became known as the oversized crown (Big Crown) watch, and it helped pilots wear gloves while trying to adjust their watches.

World War II marked a decline in distribution for the company. To keep moving forward, the company starts manufacturing alarm clocks. In 1949, the eight day power reserve model was launched.

During the war, Oris limited its production of alarm clocks to 200,000 a year.

In 1952, Oris launched the first automatic watch with a power reserve.

For the next 10 years, the attorney worked on reversing the “Watch Statue”, preventing Oris from using lever escapements in its watch movements. Thrilled, in 1966, he succeeds, earning his place in Swiss watch history.

Oris launches a state-of-the-art diver’s watch. The watch was made with a unidirectional rotating bezel with timer scale, bold, luminescent numerals, and water resistance to 100m.

Fifty years later, the watch is re-released and one of the company’s best launces.

By the end of the 1960s, Oris was one of the 10 largest watch companies in the world. It produces 1.2 million watches and clocks each year. Oris has an apprenticeship program, training engineers and watchmakers each year, and develops its own tools and machinery to help produce the watches.

Oris watches are not inexpensive, and with this being said, they have a significantly lower price tag compared to other Swiss luxury mechanical watches. The price point of Oris watches allows the average layperson to own luxury watches. on.

Oris is a symbol of innovation. Being one of the smaller Swiss watchmakers, they have focused on mechanical automation. The watches are complex. They assume a practical design in all their watches, and they don’t compromise functionality for sophistication.

Oris works regularly with the diving community, and the company is invested in the preservation of marine life and spaces.

Oris is independent and also collaborative. They partner with other individuals to create limited edition timepieces. Watches like the limited edition Carlos Coste Cenote series and their work with various sporting and arts organizations show their dedication to partnerships.

Some of Oris’s partners include nature photographers, and extreme athletes. Because these partners challenge traditional traditional perspectives on the natural world, it’s a perfect collaboration.

For example, the Roberto Clement Watch, part of the Big Crown Collection, was a collaboration with the Robert Clemente Foundation. The watch pays tribute to the hall of fame and his humanitarian work as his 3,000 hits in the Major League. Throughout the years, Oris has produced many other limited-edition timepieces to honor barrier-breaking athletes.

All Oris watches are mechanical and meet the standards that go into the legally protected “Swiss-Made” designation.

For most of its watches, Oris uses modular components and adds their own improvements. They developed a fully in-house movement and designed these movements independently, producing them with the aid of Swiss specialists.

In 1984, Oris reaffirmed its commitment to producing only mechanical watches for hard-working but refined timepieces. The symbol of Oris mechanical watches is the red rotor, a Oris trademark; culture, diving, aviation, and motor-sport. Oris watches are made for everyday wear at an exceptional value.

Water resistance to at least 100m

Specialized clasp system that helps divers secure a perfect fit for their watch over a wetsuit. The Safety Anchor ensures that a diver won’t lose their watch.

Oris has been making pilot watches with the debut of the Big Crown in 1938.

The Oris Big Crown was re-released, and the popular configuration, the Big Crown Pointer Date, has a pointer that gives the date, slowly moving around the dial each month.

The watch includes a stainless steel case or a bronze one for a more vintage feel. The watch is water resistant to 50m.

The Big Crown Propilot is to a pilot what the diving watches are to the diver. Water-resistant to 100m, the watch comes in various configurations designed for today’s pilots.

In the seventies, Oris discovered the world of motor racing. A fraction of a second can make the difference in a win or not. The watch design specifically designed for the fans of motor sports, the watch leans towards masculine aesthetic.

‌The Oris Chronoris has an inner rotating bezel, and the Chronoris Chronograph watches has has inner dials and a tachymeter.‌

Producing affordable watches with excellent quality is what Oris does. Whether you are a diver, pilot, sports fan, motor-sports fan, or any other person wanting a luxury watch with a realistic price, Oris has been producing watches since the company opened its first watch factory in 1911.

Lambert Pawn Shop is a full service shop licensed in California and serves the beautiful cities of Whittier, Rowland Heights, El Rancho, Hacienda Heights, La Habra Heights, East Whittier and La Habra, California. They pride themselves in providing financial services in a fast and courteous manner. With over 25 years of combined experience in the pawn industry, they have the flexibility to lend the maximum dollar amount possible on almost anything of value.

Lambert Pawn has a large selection of previously owned luxury watches, including Rolex, IWC, and Oris watches. Their inventory change is often so check in from time to time. They have a convenient online store at https://shop.lambertpawn.com/

By visiting Lambert Pawn Shop, you will get convenient solutions for short-term cash. They buy, sell, pawn, and trade on gold jewelry, platinum, silver, diamonds, and precious stones. They also accept and have for sale luxury watches, electronics, tools and musical instruments.

If you are looking to pawn an item, or sell or trade an item, you don’t even have to leave your home, because they have a process for you to email them pictures and a description so you can get a quote right away.

Epilepsy Safe Mode
Dampens color and removes blinks
This mode enables people with epilepsy to use the website safely by eliminating the risk of seizures that result from flashing or blinking animations and risky color combinations.
Visually Impaired Mode
Improves website's visuals
This mode adjusts the website for the convenience of users with visual impairments such as Degrading Eyesight, Tunnel Vision, Cataract, Glaucoma, and others.
Cognitive Disability Mode
Helps to focus on specific content
This mode provides different assistive options to help users with cognitive impairments such as Dyslexia, Autism, CVA, and others, to focus on the essential elements of the website more easily.
ADHD Friendly Mode
Reduces distractions and improve focus
This mode helps users with ADHD and Neurodevelopmental disorders to read, browse, and focus on the main website elements more easily while significantly reducing distractions.
Blindness Mode
Allows using the site with your screen-reader
This mode configures the website to be compatible with screen-readers such as JAWS, NVDA, VoiceOver, and TalkBack. A screen-reader is software for blind users that is installed on a computer and smartphone, and websites must be compatible with it.

We firmly believe that the internet should be available and accessible to anyone, and are committed to providing a website that is accessible to the widest possible audience, regardless of circumstance and ability.

To fulfill this, we aim to adhere as strictly as possible to the World Wide Web Consortium’s (W3C) Web Content Accessibility Guidelines 2.1 (WCAG 2.1) at the AA level. These guidelines explain how to make web content accessible to people with a wide array of disabilities. Complying with those guidelines helps us ensure that the website is accessible to all people: blind people, people with motor impairments, visual impairment, cognitive disabilities, and more.

This website utilizes various technologies that are meant to make it as accessible as possible at all times. We utilize an accessibility interface that allows persons with specific disabilities to adjust the website’s UI (user interface) and design it to their personal needs.

Additionally, the website utilizes an AI-based application that runs in the background and optimizes its accessibility level constantly. This application remediates the website’s HTML, adapts Its functionality and behavior for screen-readers used by the blind users, and for keyboard functions used by individuals with motor impairments.

If you’ve found a malfunction or have ideas for improvement, we’ll be happy to hear from you. You can reach out to the website’s operators by using the following email

Our website implements the ARIA attributes (Accessible Rich Internet Applications) technique, alongside various different behavioral changes, to ensure blind users visiting with screen-readers are able to read, comprehend, and enjoy the website’s functions. As soon as a user with a screen-reader enters your site, they immediately receive a prompt to enter the Screen-Reader Profile so they can browse and operate your site effectively. Here’s how our website covers some of the most important screen-reader requirements, alongside console screenshots of code examples:

We aim to support the widest array of browsers and assistive technologies as possible, so our users can choose the best fitting tools for them, with as few limitations as possible. Therefore, we have worked very hard to be able to support all major systems that comprise over 95% of the user market share including Google Chrome, Mozilla Firefox, Apple Safari, Opera and Microsoft Edge, JAWS and NVDA (screen readers), both for Windows and for MAC users.

Despite our very best efforts to allow anybody to adjust the website to their needs, there may still be pages or sections that are not fully accessible, are in the process of becoming accessible, or are lacking an adequate technological solution to make them accessible. Still, we are continually improving our accessibility, adding, updating and improving its options and features, and developing and adopting new technologies. All this is meant to reach the optimal level of accessibility, following technological advancements. For any assistance, please reach out to