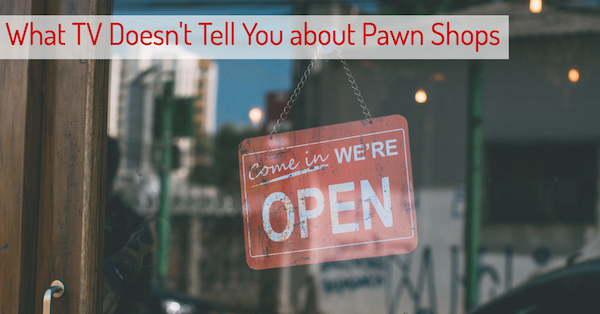 In the last ten years, a tide has shifted in the pawn shop industry. Or rather, in the way the pawn shop industry is viewed. In 2009, a reality show called, “Pawn Stars” debuted on the History Channel. It quickly became a fan favorite and is still on the air today despite the flurry of knock-off shows that have tried to compete with the show’s ratings (e.g. Hardcore Money, Hardcore Pawn, Beverly Hills Pawn, etc.).

Thanks to shows like Pawn Stars, people who have never visited a pawn shop in their life have been given access to the inner workings of a real-life pawn shop in Las Vegas, NV.

Most reasonable people assume that what they see on reality TV shows is either scripted or at the very least, well-polished. Do pawn shops really haggle over civil war rifles and Paul Revere’s silver spoon every day? No! In fact, if you were to video the day-in, day-out activities of a pawn shop, it would most likely put you to sleep. Nevertheless, it is fun to watch.

We thought we would share some insider information on how shows like Pawn Stars make it happen behind the scenes.

What TV Doesn’t Tell You about Pawn Shops

Producers of the show vet potential sellers and their items before they ever walk into the store. Given that the most common items in pawn shops are used electronics, tools and musical instruments, you should not be surprised to hear that the undeniably rare items that are brought into the Pawn Star shop are pre-arranged beforehand.

It doesn’t matter how cool or rare an item is; if the seller is awkward on camera, it’s not good TV. That’s why producers coach the sellers on how to act during their interaction with the Pawn Star cast.

Coaching doesn’t stop there, either. The cast is also “coached” with information about the item they are discussing with a seller. Ever wonder how in the world they know so much about so much? Well, they don’t.

The agreed upon sale price for the pawned item is determined before filming. Hope that doesn’t break your heart, but the logic makes sense. A lot of people want to be on TV.

If the producers assumed that every seller would be willing to sell their item to the pawn shop for a reasonable price, they would waste a lot of time.

Pawn Shops Are Not That Busy

It is true that the Pawn Stars shop has become a tourist attraction in Las Vegas, but all those people in the busy background of the show are not tourists or customers! They may be fans of the show, but they have all been selected to be in the background and have signed waivers to be on film.

While there is a lot that goes into a show like Pawn Stars that isn’t quite “reality”, we are still thankful for the success it’s had. Not only did it help bring pawn shops into the spotlight of American culture for good reasons, but it also extended a bridge to those people who had never even considered stepping into a store.